Open Reflex Sight, by Holosun, due to their heads-up display (HUD) design allows for a wider field of view. The field of view is how much of the image you can see in the window or objective lens. Reflex sights let you clearly see the target as well as what’s around it, giving you a tactical advantage by allowing you to retain your situational awareness.

Open Reflex Sight uses a lens that functions somewhat like a mirror. It is also faster at target acquisition because this sight isn’t as confined in the head’s up display as in the red dot tube style.

Open Reflex Sights are more susceptible to the elements, though.  Also, reflex sights have an exposed light path so if anything blocks that path, you lose the reticle. The aiming point is projected forward onto a lens, which reflects it back and allows you to see the red dot. This type of reflex sight, commonly referred to as an exposed reflex sight, has a very distinct look. There is no tube-shaped sight, only a small, clear window that the user can see the aiming point on. 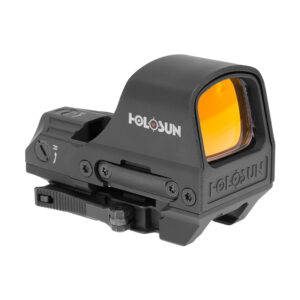 The HS510C, by Holosun, is an open reflex optical sight for rifle and carbine applications. For instance, features include Holosun’s Super LED with up to 50k hours battery life, Multi-Reticle System, Solar Failsafe, and Shake Awake.